Credit Agricole S.A. Group builds on its human commitment and proposes a common set of social standards to its employees around the world

First measurable achievement: 16 weeks’ paid maternity leave.
The Crédit Agricole S.A. Group has signed an international framework agreement with UNI Global Union, the international trade union federation of the private service sector. This global agreement covers human rights, basic labour rights, and fostering of social dialogue. It builds on the Group’s commitments by proposing the same social standards to all its employees, regardless of where they work, and helping to improve working conditions. This agreement offers a frame of reference to Crédit Agricole S.A. Group’s 75,000 employees in all 47 countries where the Group operates.

A stronger corporate commitment to all employees around the world

The agreement includes a major commitment to parenting, establishing the principle of 16 weeks’ paid maternity leave, which will be available to all of the Group’s female employees starting on January 1st 2021. It also recommends that the entities arrange adoption or paternity leave to account for the diversity of parenting situations.

In addition, it covers the following commitments:

The agreement will be rolled out in all countries where the Group operates. It is a benchmark against which the Group’s entities will develop their social policy locally, sharing it with suppliers and subcontractors.

An agreement in line with the Group’s Human Project

With this agreement, the Group is renewing its commitments to human rights and basic social rights, foremost among which is freedom of association and a ban on all forms of discrimination.

This is one of the first embodiments of the ambitions laid out by the bank for the human pillar of its Group Project. The aim of this project is to make Crédit Agricole the preferred employer in financial services in France and a top five employer in Europe. Strengthening social dialogue is an important component of the system. By placing the women and men of Crédit Agricole at the crux of its Group Project’s success, Crédit Agricole is building a framework of trust that will foster a reciprocal commitment from employees and the company.

Lastly, this agreement is also fully in line with the Code of Good Conduct, the company’s Ethics Charter, and its support of the Global Deal initiative, which is aimed at improving social dialogue and promoting fairer growth. 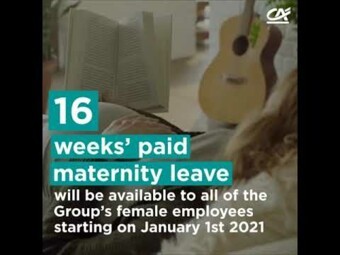